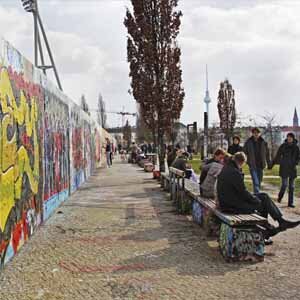 The famous Berlin Wall graffiti paintings come to life on the Mauerpark!

The Mauerpark which translates to “wall park” is a famous a social, cultural, and artistic center of Berlin, which is located at the boundary of Prenzlauer Berg and the Gesundbrunnen district. This grassy park, which is a major tourist attraction, symbolizes a free and vibrant atmosphere that characterized the artistic freedom and spirit enjoyed by the artists, who drew murals and graffiti on its walls. This was actually once  the militarized “death strip” of the infamous Berlin Wall, that divided East and West Berlin.

The area, which people called the Mauerpark, was originally the site of the Northern Train Station or Old Nordbahnhof, which opened in 1877 as the southern terminal of the Berlin Northern Railway, Berlin-Stralsund. Its operation as a passenger terminal, however, was short-lived with the establishment of the Stettiner Bahnhof, a train station in the Mitte district of Berlin, that also serves as a hub for local bus and tram lines.   The Old Nordbahnhof was delegated as a freight yard. By 1950, the Stettiner Bahnhof adopted the name Nordbahnhof because of its primary position and function in the public transportation system of Berlin. Meanwhile, the Old Nordbahnhof was then called Güterbahnhof Eberswalder Straße. In 1961, the freight yard was decisively shut, when the Berlin Wall was constructed following the growing tension between the communist USSR, that reigned in the eastern side of the wall, and the democratic allies led by the US, which controlled the west side of the wall.

The Berlin Wall and graffiti culture

After the collapse of Germany in 1945, Berlin was divided into four occupation zones of Allied military occupation: US, France, Britain, and Soviet Union. The land area of the Old Nordbahnhof, extending from Bernauer Straße to Kopenhagener Straße, was specifically divided between the French and Soviet sectors. When the Berlin Wall was built, this zone became part of the heavily protected Death Strip. The Berlin Wall actually has two walls, one wall from the west and another wall from the east. In between these two walls is the Death Strip, where many eastern Germans have lost their lives escaping and deflecting to the West Germany.
Mauerpark is also the site of one of the watching podiums that West Berlin citizens climbed on, to take a glimpse into East Berlin over the wall. This is at the forefront of the Wall strip, where a sharp mound of the past railway tracks is elevated.

Mauerpark opened in 1999, ten years after the fall of the Berlin Wall in November 1989. What once was a no-man’s land, called the death strip, was transformed into a public park. And the reconstruction of the area was supervised by landscape architect Gustav Lange. The park per se is not really aesthetically stunning. However, what makes the park stand out, is the way the people memorialize the site. The park is especially known for the events it hosts every Sunday. It has a flea market primarily run by private merchants. There are street musicians, jugglers, hipsters, joggers, cyclists and dancers that provide entertainment to all people wandering in the park. And you can also sing your heart out in the open-air karaokes, or in front of a hundred people in the amphitheaters, or you can just have a relaxing drink on the grassy lawn.

The exact date when the walls in Mauerpark transformed as a beloved canvass for artists to spray paint is unknown. Apparently, graffiti was illegal and covertly done. In fact, graffiti is illegal in the whole of Berlin and carries a penalty of imprisonment.  Only Mauerpark has the site where it is legal to spray paint. Spray-painting, as a cultural practice, however, is older than the park itself and has become symbolic of the freedom that the citizens of Berlin attained since tearing down the wall. The street art on the walls is a potent and expressive way to recapture a sense of hollowness and escape the perception of weakness and helplessness that the Wall had once bestowed upon the people. And artists such as our Team, among others, continue this legacy by holding workshops for budding graffiti artists, tourists and other people who want to learn to spray paint, are looking for a way to express themselves, or simply want to enjoy or feel the perks of freedom.