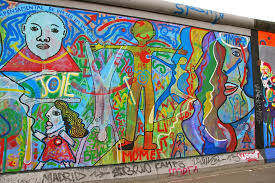 Things to know about the Berlin Graffiti history

Graffiti has a long history with scribbles on the walls being found across the world, almost everywhere on this planet. It certainly is one of the first forms of artistic expression, the first human attempt of creativity which has survived ages and years until today. But the phenomenon really caught up during the 20th century and the beginning is traced back to 1970s to the city of New York.

Graffiti, in general, are the non-traditional forms of artistic and cultural expressions that are drawn on public spaces and are influenced by the culture and tradition of the territory. Graffiti, or the street art, first originated to express discontents and also for creating widespread awareness on various sociopolitical issues on community and local level. In the years to come, it evolved into a global visual culture.

Berlin is called the “street art capital”, the “graffiti Mecca” and also the “most bombed European city” among the street art community. The historical evidence of the art scene related to the state of Berlin evolved on the Berlin Wall’s west side. After the division between East and West Germany, initially, the city of Berlin was divided with a barbed wire fence in the 1960s. Later on, it was developed into a sophisticated security system with electric fences, concrete walls, and guard towers.

The intensified security system further strained the atmosphere between the two sides. When, during the eighties, the wall was raised to 14 feet tall, it became the perfect canvas for artists as well as for the individuals on the side of West Berlin to declare and express their affiliations and views. Initially, the early settlers from the American-occupied sectors used the walls to express their faiths and thoughts. From the artistic point of view, it was the French artist Thierry Noir who started painting on the wall while he lived near the Berlin Wall.

Afterward, many unknowns, as well as acclaimed artists, followed Noir and started painting on the wall. Many graffiti artists of the first generation started meeting near the Berlin Wall. Most of them were the children of servicemen from the US, who introduced their local graffiti culture into West Berlin. That is why you will find most of the early graffiti creations being hugely inspired by the graffiti scene from New York.

Graffiti Evolved after the fall of the Berlin Wall

After the Berlin Wall collapsed, the street art movement gained more momentum with the artists from the Eastern side like Friedrichshain, Mitte, and Prenzlauer Berg adding more vibrancy to the gray areas on the eastern side. As a part of taking the movement and the drive to express with spontaneity further, a remarkable mural project was started on the remains of the Berlin Wall construction. Creative artists across the world gathered together near the Wall in 1990 to paint the empty side of the Wall with the view to celebrate reunification and to express hopes for a brighter tomorrow.

Today, the remains of the Berlin Wall have more than 100 murals and the part is known as East Side Gallery, which is one of the world’s open-air galleries. You can also be a part of the movement, learn ways of creating graffiti and find a way of expressing your opinion and artistic side by joining a course at our unique Graffiti guided tour in Berlin.

To get to know more about this amazing culture, feel free to write us an email using our contact page, for a unique Graffiti workshop in Berlin or a gift card to offer to your loved one. We give you the chance to paint your first graffiti on the original Berlin Wall!