How Graffiti Started – Learn more about our Graffiti tour in Berlin 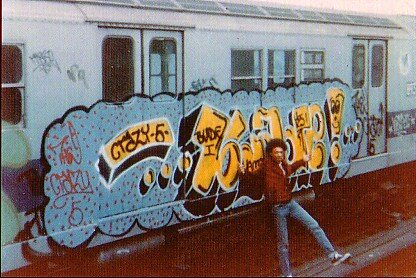 Graffiti, as we know it now, began in Philadelphia, in the 60s. In 1955, graffiti started appearing in New York City. Around 1970 the center of graffiti culture moved from Philadelphia to New York City, with legends as TAKI 183 and Tracy 168 following. They were using a name combining their graffiti nickname and added their street number.

They were the first people that painted on subways, starting this big culture by transporting their names on trains through all the city! A movement was born, that has not yet ended, and is nowadays one of the most popular subcultures! Graffiti styles started their own evolution with legends like DONDI, Lady Pink, Zephyr, Julio 204, STAY HIGH 149, PHASE 2, and many other more talented artists, that were or are still active in the international graffiti scene!

Graffiti painting was back then and is still a competitive art form, and all graffiti artists want to see their names across the city. Around 1974 artists like Tracy 168, CLIFF 159, and BLADE ONE started to create works with more than just their names; they started to add comic figures to their names, with the same goal: to be the King of the city!

Beginning of the Graffiti popularity in media

In 1971, the New York Times published on July 21st and an article titled  “Taki 183 Spawns Pen Pals”. This was the first-ever article about a famous New York graffiti artist: TAKI 183. The pictures illustrated in the article were taken from the legendary graffiti photographer, Martha Cooper. The article explained how the 17 years old artist, took advantage of his daily job as a courier to tag his name wherever he could.

The public that was just getting to know Graffiti by seeing it on the walls and subways, had for the first time the chance, through a very nice interview (see here), to read about the first graffiti artist.

Our unique Graffiti Tour in Berlin

We want to share this amazing subculture we have with you and make you discover what is real street art during one of our unique Graffiti tours in Berlin. You will be able to get in touch with real writers and get to discover the Graffiti culture, gaining from 15 years of experience and stories all around the world.

If you want to get to know more about this amazing culture, feel free to email us using our contact page, for a unique Graffiti workshop in Berlin. We give you the chance to paint your first graffiti on the original Berlin Wall!